The Desert and the Robot Auction
Rey's Theme

Temple of the Cactus God

The Cactus Empire (formerly, the Cactus Kingdom) is a theocracy under the rule of DukeofHoth, who serves the Great Cactus God. It is home to the notable Fieri family, the last known Guy Fieris on the server after the Fieri Massacre of July 2016. Though they have been technologically hindered in comparison to the other nations of Memeworld and as such heavily restricted on building materials and techniques, they make up for that with their strong relationships with the "Great Powers", Germania, Pumaslavia and the Illuminati Kingdom. They are also working on becoming more technologically advanced themselves, gaining new advancements in many fields with help from the previously mentioned powers.

After the Kingdom of Vynland and the great walled Illuminati Kingdom were founded in late 2015, DukeofHoth began building a small settlement outside of Illuminati, with permission from their leader. However, after the first appearance of the Great Cactus God, the Cactus Kingdom was officially founded, though without a name that stuck. It was called the Desert Cactiphate, the Cactiphate, etc, but the name Cactus King stuck after the other nations of Memeworld started using it (though it used the "western" term of King instead of the desert title Cactiph). The purpose of this nation was to dutifully serve the Great Cactus God and whatever it willed. Though they were well received by their eastern neighbors, the Vynns across the Floralis River were outraged that another nation formed so near to themselves.

A Temple was soon built for the Cactus God, and the small settlement grew. Houses were built on the premises, and immigrants started flocking to the new state. On February 8, at least five citizens ventured into an unexplored cave, but Duke became concerned when they didn't return. He tasked a rescue mission into the treacherous cave, and three of the villagers were saved. However, due to a lack of better technology, the last two had to be left. The February Tragedy is remembered to this day, and the Forgotten Cave was sealed with obsidian so that no other citizens will stumble into an ill fate.

Shortly after the Kingdom was founded, the Vynns claimed the desert coast to the Floralis River. However, the two Kingdoms were able to work out an agreement known as the Treaty of Cactulupe-Pendalgo (though it has been lost to time), which gave the Cactus Kingdom the land. After Billville was founded by the Illuminati Kingdom, they agreed to sell a majority of their walled city to the Cactus Kingdom. These developments greatly expanded the size of the Kingdom. It was also in this period that relationships started to be formed with nearby Sunflower Kingdom and Pumaslavia. Two small forts were established near the Vyn/Pumaslavia border, but were later destroyed by the then "Mad King" Pumaslam.

Over the next months the Kingdom flourished, with Vynn immigrants coming to the country, and the Guy Fieris becoming well known in the settlement. In addition, a new McChill's branch named McCactus was built, as well as Cactus Beach (formerly Kektus Beach until that word was overkilled by a scrub), which became the most popular beach getaway in Memeland. In early June, a small parcel of land across the Floralis River was settled by the Kingdom and named Liber Land. However, it was only settled in hopes of a land trade with Vynland for their desert area "Florulpe".

On June 13th, the King of Pumaslavia, Pumaslam, went mad with power, and massacred almost the entire race of Guy Fieris while they were gathered in the Cactus Kingdom. Former allies turned into quick enemies, and hostilities were at an all-time high until "Mad King" Pumaslam was assassinated by a Pumaslavian, after which relationships began to mend. During the Cactus-Pumaslavian hostilities, the Billville Treaty was signed by the Kingdom and Vynland, agreeing to exchange Florulpe (later renamed Cactiland) for Liber Land. The King, DukeofHoth, also published the Cactus Reformation Act on June 16th amidst the hostilities, renaming the nation to the Cactus Empire, and declaring themselves as a stronger and more determined nation than they had been before, being pushed around by others such as Pumaslavia. After hostilities ended, the Amadi Obama Monument was built, and members of the Fieri family (well known Guy Fieris) were discovered and conservation efforts began.

In January 2017, yet another treaty was signed between the Cactus Empire and the Kingdom of Vynland, the Treaty of Parthia. It resulted in Vynland renouncing all the claims it had on the Spawn Desert, including Fort Bort which was, along with Vynland's desert territories, given to the Cactus Empire, and it also resulted in Vynland gaining control of the territory Duke's TNT Warehouse used to be on in Parthia and the moving of the Dukezilla statue 100 blocks away from its location back then. Negotiations over the treaty were very tense but finally the two sides agreed, albeit hastily: Penstubal had to quickly go and the treaty was only 1 page long in the end.

Since that treaty was signed, the Empire has been continuously building, and slowly modernizing. The Cactiland National Park was built over the "Cactiland Wasteland", and opened in late January. Shortly after the opening, work began on terraforming "The Wasteland" between the Meme Monuments and Illuminati, which took quite some time. A zoo was built on that land, and after two months of work, the Cactus Zoo opened on April 8th and immediately was recognized by many as the best Zoo in Memeworld. Later on April 8th, the famous Cactus Museum received an expansion that was named the lilChillCat Art Gallery. Many more projects and expansions are said to be in the works. 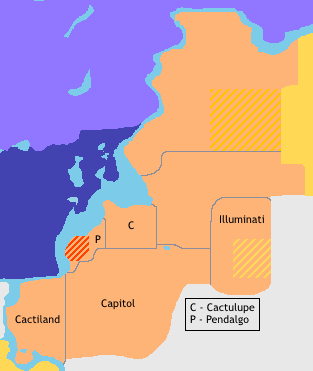 Cactiland, formerly called Florulpe by previous owners, became a state after it annexed by the Empire due to a trade with Vynland. Things to see in Cactiland include:

The Capital state is the oldest and largest state in the Empire (though that may change when the Sarmatia territory gets statehood). It is also the center of the Empire, since it is home to the Temple of the Cactus God. Things to see include:

The Illuminati Kingdom was founded before the Empire, and served as a basis for where the first citizens settled down. After Billville was built, the Kingdom sold a large part of their former land to their friends of the Cactus Empire, and that land became the modern-day state of Illuminati. It doesn't seem to apply to typical laws of nature, and is considered quite a strange place. Places to see include:

Pendalgo is one of the smallest and least developed states, due to its small size. There have been calls to merge the states of Pendalgo and Cactulupe due to Pendalgo's small size. Places to see include:

Most of this territory was claimed by Vynland (and named Samartia) solely to annoy the Cactus Empire. After months of occupation, the land was liberated by the Empire with the Treaty of Parthia. It was renamed Sarmatia as a mockery of the original name, but it has already been stated that its state name will be something different, when it becomes developed enough. If it keeps its current land, it will be the largest state in the Empire. Places to see include:

The Wasteland Territory was claimed in Summer 2016, after the Cactus Reformation Act was written. Since then, some of the Empire's greatest entertainment hotspots have been built here, including: 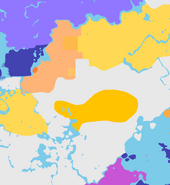 Political map of the Cactus Empire, shown in light orange.

An overhead view of the Empire.
Add a photo to this gallery

The Cactus Empire and Germania don't directly communicate unless it pertains to international affairs, with all other messages being relayed through The Fungeon. When discussing Memeworld matters, the two are often in agreement when it pertains to Vynland.

Retrieved from "https://anotsonormalday.fandom.com/wiki/Memeworld/Cactus_Empire?oldid=13430"
Community content is available under CC-BY-SA unless otherwise noted.